Voices of the People

Book Launch “Voices of the People” The launch of the book “Voices of the People – Perceptions and Preconditions for Democratic Development in Fiji” took place on 20 February 2013 in the Civic Centre in Suva. The presence of about 300 people including representatives from different government ministries, heads of churches, academics, representatives of businesses, diplomats, representatives of a variety of Civil Society Organisations and citizens of different age groups from all walks of life showed that there is a great public interest in the issues the study deals with. With former Vice President Ratu Jone Madraiwiwi (see foto) as the chief guest the launch itself was framed by a powerful cultural performance by “Rako” – a well known cultural performance group from Fiji (see foto). In a symbolic act co-author Aisake Casimira presented copies to the head boys and girls of three Suva based Secondary Schools who will be voting for the first time in 2014. 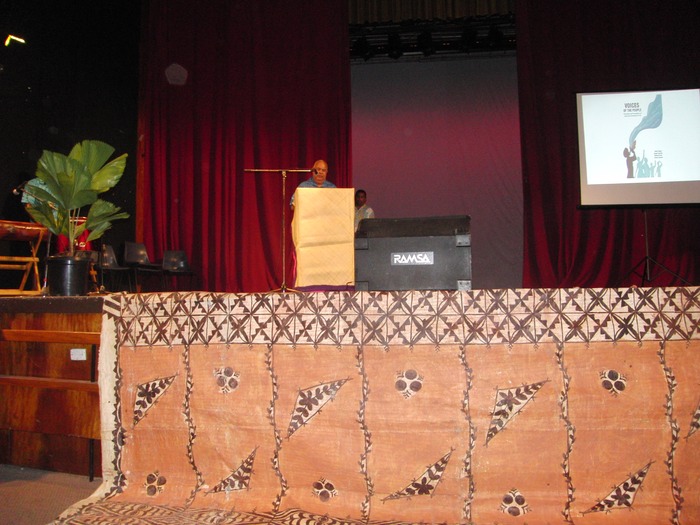 The book presents on 228 pages the results of a research project undertaken by the Pacific Theological College’s Institute for Research and Social Analysis (IRSA) between May 2011 – October 2012 conducted through 41 focus group discussions involving 330 participants, and conducting 82 in-depth interviews, on the issues decision-making, leadership, citizenship, the rule of law, and democracy in order to understand what the people of Fiji think of, and what their vision is, for good governance – in the form of democracy, or otherwise.

The Study, which is co-authored by Volker Boege (PaCSIA, University of Queensland), Aisake Casimira (Pacific Conference of Churches), Manfred Ernst (IRSA-PTC), and Felicity Szesnat (University of Sussex, UK), recognises that, if proposals for democratic reforms are to be made, the people of Fiji need to articulate and develop a form of democratic governance that is appropriate and suitable to local traditional and political conditions, while still being mindful of the fundamental ideals and values of democracy.

In his Vote of Thanks the Director of the Institute for Research and Social Analysis, Dr Manfred Ernst stated: “One cannot plan it, but it just happened that I feel that our publication comes at the right time…From the beginning of the project until today we have been very much aware that the government could have stopped us at any time. We are grateful that we have been able to carry out the project independently without interference from anyone.”

For orders please contact www.uspbookcentre.com/. An electronic copy of the report can be downloaded here.