By Serge LoodeNovember 2, 2017No Comments MPDN aims to build the capacity of local Indigenous non-governmental organisations to plan, facilitate and develop grassroots dialogue and conflict resolution processes in Melanesia. Melanesian countries (PNG, Vanuatu, Solomon Islands and Fiji) are currently experiencing an unprecedented era of social change, which causes political, social and environmental pressures. Since their independence these countries are in a process of state formation that is often marred by a lack of internal revenue, frequent political upheaval and violent conflict. In spite of these problems, many communities in the region have also preserved Indigenous systems of governance and conflict resolution which provide social order and peace at a community level.

The MPDN is funded by Bread for the World, the development agency of the protestant churches in Germany. All three local partner organisations from Bougainville and Solomon Islands have successfully concluded their planned project activities and submitted their final reports. In May 2017 PaCSIA organised the first experience sharing dialogue for all three local partner organisations in Buka, Autonomous Region of Bougainville.

BID has facilitated three community dialogues in the constituencies of Eivo-Torau, Bolave and Ioro in Central and South Bougainville and has conducted one follow-up visit to each community. NPA has facilitated 5 project activities in North Nasioi, South Nasioi and Kongara in Central Bougainville. The activities included two peacebuilding awareness workshops, two women’s dialogues and one family reconciliation and domestic violence intervention. PFSI has facilitated 9 project activities, including three restorative justice training programs (one for faith providers in Honiara, one for prison inmates in Auki – Malaita, one for female inmates in Honiara and one for prison inmates in Gizo – Western Province). They have also organised three Christmas Angel Tree dialogues and gift-giving events involving prison inmates, their families and correctional services staff in three different prisons in Solomon Islands. They have run one Abalolo Tree program for the wives of prison inmates and have engaged in reconciliation support counselling in Western Province. All of these activities have significantly strengthened community cohesion in the respective areas of Melanesia. Additionally, all three Indigenous organisations have further developed their own capacity and established themselves as credible peacebuilding actors in their communities and regions. 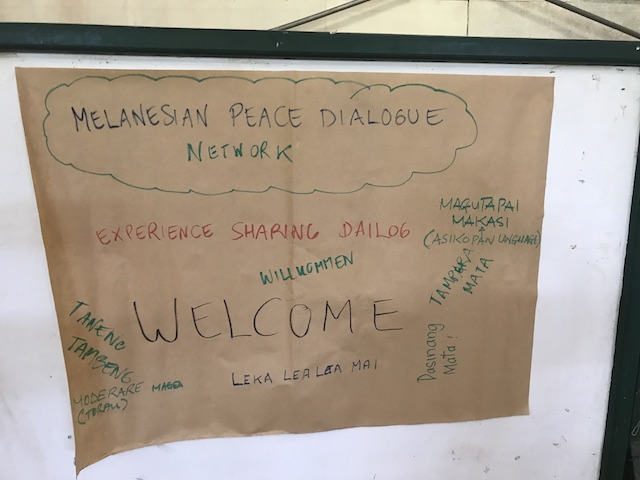 The experience sharing dialogue provided a good opportunity to summarise the positive effects of the project: all partner organisations shared their project activities with each other and commented on each other’s work. They identified individual and common challenges and brainstormed ways to deal with such challenges with each other. They consistently referred to each other’s projects and articulated that they were inspired in their own work by learning about the work and the successes of the other partner organisations.

While PaCSIA had hoped for increased collaboration and peer learning through the MPDN experience sharing workshop, the significant relationship-building that the project has facilitated has strengthened the peacebuilding field in Bougainville and Solomon Islands. This was also commented on by representatives of the Autonomous Bougainville Government’s (ABG) Department of Peace Agreement Implementation (DPAI). Both BID and NPA played an important part in preparing for the reconciliation between different former factions of the Bougainville Revolutionary Army (including Meekamui factions) in Central Bougainville that took place on 17 May 2017. This reconciliation was of historic importance and a big step towards a unified and peaceful Bougainville. DPAI Secretary James Tanis said that both organisations, BID and NPA, played important roles by preparing the former Bougainville Revolutionary Army (BRA) commanders involved for participation in the ABG-led dialogue. NPA commented that without the recognition they had gained through participating in the MPDN, they would not have been considered to assist by the ABG.

PFSI’s project activities have also resulted in unexpected positive effects. During the Christmas Angel Tree Program in Malaita the team connected with the wife of a prison inmate whose house had been burned down, and she and her family had been chased away from their village. PFSI managed to connect her to other women with similar problems and to develop a training workshop for 10 women that taught the women skills to produce more refined garden products that they now sell to make a living. The workshop also established a community network of women which helped them to better deal with their traumatising situations.